Himachal Pradesh is a complete mountain state. The state is located between the chains of Himachal Mountains in the northern western corner. Joins between 6500 to 450 meters. Madhya Pradesh mountain ranges, groups. Here, chewing, Spiti, Lahaul, Kullu, Kinnaur and Kangra valleys are distributed as deep as the following territories, with snow-capped peaks that leave the sky. This state is situated in the south of Jammu and Kashmir. Its south-Uttar Pradesh is existing. We can say that China and Tibet are the countries in the east. In the West is Punjab and Haryana and Jammu and Kashmir in the north and south Uttar Pradesh. Himachal Pradesh GK 2021 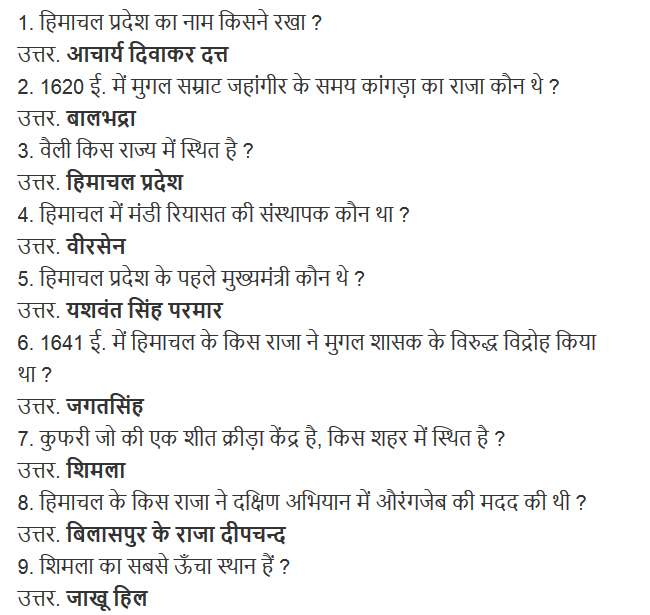 Himachal Pradesh GK 2021 Rivers have built deep valleys by overturning the mountains the mountains are north and rising from west to east to the head south.on this page you will find information about Himachal Pradesh related quiz and current affairs. If you’d like to read HP’s trivia, you’ll find new quiz daily on our website. Madhya Pradesh general knowledge is given here for free in Hindi for our requires examinees. Himachal Pradesh GK 2021
1. Who kept the name of Himachal Pradesh?
North. Acharya Diva Dutt
2. Who was the king of Kangra at the time of Mughal emperor Jahangir in 1620 ad?
North. Balbhadara
3. What state is the valley located in?
North. Hp
4. Who was the founder of Mandi Homestead in Himachal?
North. Virsen
5. Who were the first chief minister of Himachal Pradesh?
North. Yashwant Singh Parmar
6. In 1641 A.D., which was the king of Himachal Pradesh to revolt against the Mughal ruler?
North. Jagatsih
7. Kufri is a cold sports centre, which is located in the city?
North. Shimla
8. Which of Himachal Pradesh did the King help Aurangzeb in the South campaign?
North. King of Bilaspur Deepachanad
9. Is Shimla the most elevated place?
North. Jakhuu Hill
10. The Mughal ruler Jahangir had the right to Kangra the king of Himachal Pradesh at Fort
North. King of Noorpur Jagatsih
11. Noorpur Upamanadal of Kangra district was named Dhameli from the “Noorpur” who was the Mughal ruler at the time?
North. Jahangir
12. What state of India is the second-lowest corruption in the Transparency International survey of 2005?
North. Hp
13. Was the first paragliding World Cup held in India?
North. Hp
14. How many districts does Himachal have total in the state?
North. 12
15. What was the Treaty of Sugauli?
North. Between East India Company and Nepal King
16. When did Sher Shah Suri send his general Khavas devour to the authority over Nagarkot and other hilly states?
North. 1540 in E.
17. On the basis of historical relics, what was the basav of human in Himachal Pradesh?
North. In East Stone call
18. Sher Shah Suri who conquered the state’s place?
North. Kangra
19. Which party was the first Chief minister to Himachal Pradesh?
North. Indian National Congress
20. What year was the status of the state completed?
North. 1971